Do I still have piles?  Actually not so much.  There is a little pile of cards (some of which I hope you can tell, were not made by me...) which was a result of Monday's craft morning with my baby girl.  I made a couple of emergency cards myself plus one for my Mum at the weekend which almost counts as thinking ahead in my book. 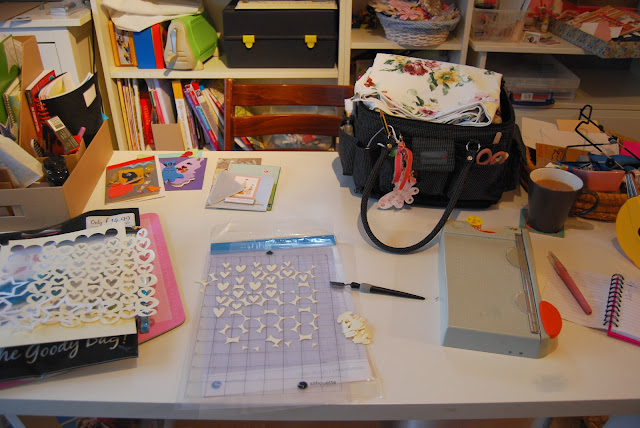 Centre stage are the results of a cutting spree on my Silhouette.  We had a bit of a falling out, my Cameo and me, when it refused to cut cleanly.  I Googled, as one does these days, and cleaned out the blade, but still no joy.  It seems that I have somehow broken a tiny piece off of the blade because a new one worked beautifully.  I haven't used it much so I am a bit gutted that it has broken already as they should last for months and months.  Hey ho.  We live and learn and hopefully don't break too many more...

I am really really pleased with what I can produce on it though and I am really looking forward to using those backgrounds on my layouts this coming weekend at the retreat.

Elsewhere in the house I am working on some canvasses with shells and pebbles on.  One of those things that you see in a shop and think "I could probably do that myself" and then find that you can't.  But try I will!

What's on your desk this fine Wednesday morning?  Let the world have a nosy, do, and join up with WOYWW at Julia's because the weather is miserable here and it will cheer us all up :-)

I'm patiently (not really) awaiting the results of my third OU assignment but there's no chance to twiddle my thumbs  oh no, because I'm busy getting ready for my weekend away next week too.  I've been printing off lots of ideas from Pinterest to take with me and I make my page kits accordingly.  This does seem to work well for me and means I get maximum time actually scrapping while I'm away.

This layout was one such project from our last retreat and was inspired by many of the bannered projects around including this one from my board.  B must have been about 18 months here and we met up with my niece and her staffy at a local country park.  Both B and Harvey Dog were fascinated by the cows and it was so cute and funny watching them both.  I love these pictures of her because they captured her wispy hair and chubby toddler arms. 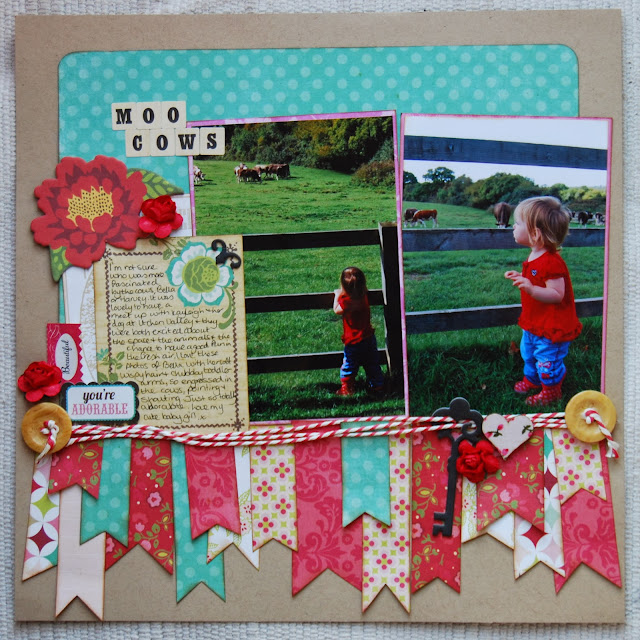 I've still got bits of this gorgeous collection left, its going on forever!  "This and That, Graceful" was the first one of these Echo Park collection kits that I had and I have loved virtually every one of them since. 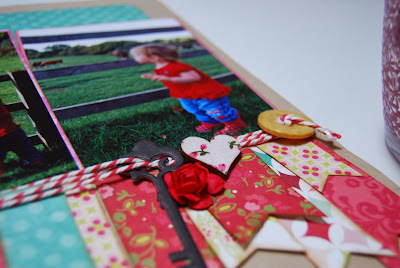 I flicked up some of the ends of the banners for dimension and added lots of chipboard and stickers from the collection and a few other bits and bobs for lots of texture. 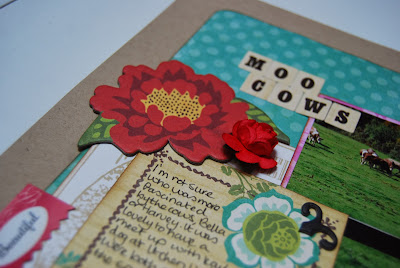 Alongside my printer churning away is my Silhouette Cameo which is also busy busy getting ready for next weekend producing some lovely die-cut backgrounds which I can't wait to share.  Kelly at Envisages has shared a heart background with me and I'm looking forward to using that one too.  See her layout here.

Well hello again!  In for a penny, in for a pound I say.

Here's my desk, full of piles.  Nothing much changes really does it?!   Oh, and there's a cup of tea of course too.  Well it wouldn't be my desk without it now would it? 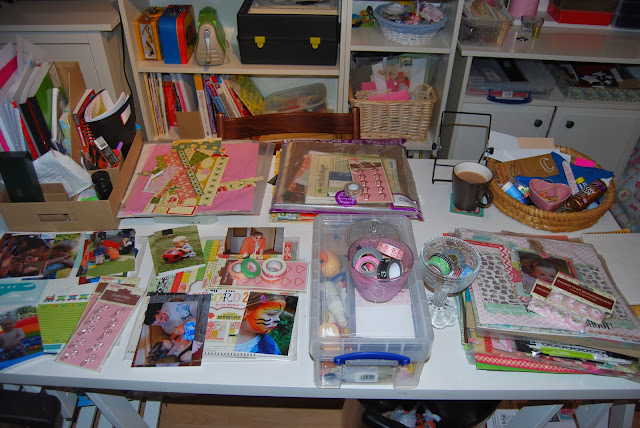 Top left is my Writing course stuff and top right is stuff that stays on my desk all the time.  I was so happy to find that little pink heart shaped bowl in Ikea because its just right for little clips and such.  The rest of the desk is preparation for our scrapping weekend away a week on Friday.  I'm just apportioning my washi tapes.

The large pile bottom right is actually a pile of almost finished layouts.  19 in total.  Some just need a little journalling or a date, some need one or two little embellishments to finish them off and some need all but the bare bones.  I'll get around to them.  Its on my list....

So nice to be joining in with the worldwide desk share of WOYWW again :-)

Can I come back yet?

Better late than never, so they say!  Goodness what a few months its been!  I THINK I am starting to come out of the other side of things now and I have missed the blogging community so much that I have seized the moment, shaken the dust off the camera and found my way back here at last.  I'm gradually making my way around and catching up with everyone.  Wanna be friends again?

... actually, I'll save that.  I typed it all out and there was just too much.  Lets just saying it involved coursework, stomach bugs, new bathrooms that went wrong, unrelated leaks, unrelated electricity problems, snow, Christmas, birthdays, stomach bugs and a major depressive crash.  The good news is that things are starting to trickle along in a more normal fashion and I have, what is hoped, is the right drug for me now so that all the other things don't cause me to fall over in a snotty heap sticking pencils up my nose and shouting wibble.

Have I been dieting?  Well yes and no.  But I'll come back to that.

Have I been exercising?  Well yes and no.  But I'll come back to that.

Have I been decluttering?  You bet your sorry little box of car boot rubbish I have!

Have I been studying?  Yes!  And getting assignments in.  I'm excited about the next module because it is Life Writing... which is kinda blogging by another name innit?

Have I been crafting?  Of course I have!  Yay! (and thanks to Jennifer's advice I *think* I have sorted the issues with my photos...)

This was one of many layouts I completed at a retreat in early December.  The retreat itself was awful but that's another story.  We had fun and scrapped lots so that's all that matters.

I used Crate Paper Farmhouse and some older AC Flair badges for this bright project.


I used lots of the stickers from the collection pack and layered up with buttons and tags and ribbons oh my!


I'm still loving the pinwheels!  Those felt leaves were a bargain in The Works and add another pop of colour and texture.

I have such plans a-foot for my blog in terms of holding myself accountable and I mainly want to get back to why I started this in the first place; to help me heal and to reach out to others who use arts and crafts to help them deal with depression and mental health problems.

I just wanted to give a shout out to Sarah at S J Crafts because she allowed me to take a step back from the design team when I felt I should quit.  She stood by me and didn't give up on me and made me believe in myself again that I had something to give.  Thank you Sarah!  We're going away for a scrapping weekend in a couple of weeks with a few of the Artful Angels and we can't wait!  I'd better start packing!