Another one I'm not sure about...

So remember a while back I mentioned about a layout I was working on and it wasn't working (it wasn't the colour one from the other week, that was ANOTHER one...).  This was a sketch from Shimelle that was used as part of the UK Scrap Factor competition and I thought it was really cool and unusual but I just couldn't seem to make it work.  Eventually I flipped it and it looked better but still not right.  I was about to put it away when my circles fell the other way up and it was an immediate improvement.  I do like the overall layout but I was hoping for something as awesome as Shimelle's - how daft is that?!  The woman is a genius, a pro and has been scrapping for many many years.  I'm a PAHM who's not naturally creative and I've been scrapping part time for about 18 months!  Anyway, here it is.. 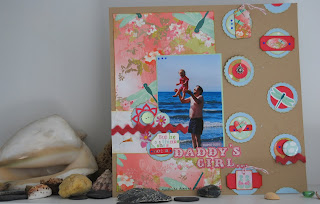 Most of the stash for this came from a Summer kit last year by Stephanie Dymant.  The strong pink was a great match for B's cute wetsuit which is why I bought the kit but it doesn't really fit with the rest of the holiday in Wales that it was supposed to be used for!

I'm trying to use up some older stuff so here I used some Anita's Dimensions flowers and some rub on letters from an Easter Do-Crafts kit, I think it was something to do with Honey and Hugs.  The title there refers to B's huge grin at spending time with Daddy (you can't really see her face that well but it is a corker!) and yet he doesn't think she is much of a Daddy's girl at all.  Given half the chance she would be though!

And talking of Dads, this was the card I made for all the dads in our family - my own Dad, Management's Dad, my step-dad, and of course Management himself (although his said "Daddy").  The papers are from that naughty pack of MME that begged me to take them home from Hobbycraft the other day.  180 sheets for £25 in grubby male style?  Yes please! 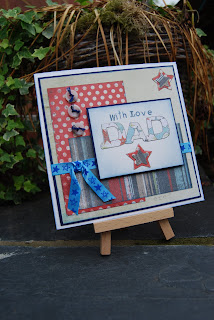 I'm off to one of my all day crops tomorrow and with Kirsty Wiseman's class starting next week, I hope to have lots of thing to share in the next few weeks :-)