I decided to join in at the last minute because I had been playing in my craft room and wanted to share other people's spaces too (and pop in and 'see' Julia), and I needed a rest.  I've been feeling poorly for nearly 4 weeks now so I went to the docs yesterday as I thought the virus was also tonsillitis and I was right.  With suitable powerful meds, I'm hoping for a recovery in time for my crop class and my day crop on Saturday because its been AGES since I last attended. 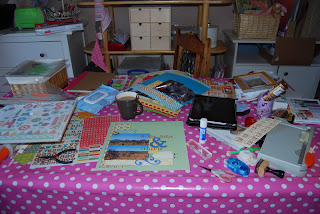 My desk is a mess in preparation for these events but I also just wanted to actually complete something, just for me.  Many months ago I did the Creative Stash Diving prompt from Shimelle's Pretty Paper Party class and made quite a few layouts to their first stage.  They need titles, journalling and embellishing so I pulled those out, chose one, and I've part way through it.  The others are scattered around with my on-going Smash book, some paint samples, and a very cold cup of tea.  I wouldn't ever have a drink on the table if anyone else was working with me but its my work I would spoil so I don't worry too much.  I was at a class once where a can of coke went over someone else's work and destroyed the last segments of the papers that were needed to complete a layout.  It was a very uncomfortable situation and I'm glad it didn't involve me!

Its half term here but B is at nursery and Management is off so the boys are watching The Empire Strikes Back while I rest on the sofa.  They've had a busy morning of fixing stuff and doing "blue" jobs and as a special treat, L got a burger from the awful van at B&Q like the "real workmen" do.  I pretended I wasn't allowing them to have one and that I would cross if they had a burger in secret and L was beside himself with excitement at a big boys outing and a secret from Mummy!  We've all been so poorly and jaded for the last few months that it is good to see him really giggle.  I love half term!