This post is brought to you as part of Story Telling Sunday with Sian at High in The Sky.

Being a slightly quirky sort, I love Halloween, or Samhain as it's also known.  The veil between the two worlds is at its thinnest so you feel closer to those you have lost at this time of year.  Of course, with the veil being thin, our lost loved ones can pass through but so can those whom we would really rather didn't, hence why we dress up and make lanterns and try to be scary.  I love that it is becoming more popular here in the UK to have fun with the Halloween theme - any excuse to dress up the children is fine by me! 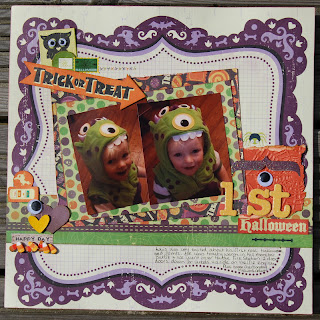 We used to live in a very rural area, a couple of doors away from the retained fire station.  Every Halloween they would have a sort of open house and the local children could come along and get a few sweets, have a sit in the fire engine and have a go at squirting the hoses etc.  Really it was about bonfire and firework safety as much as anything.  We were really excited to take Louis on his first Halloween (second really, but he was only 5 months old the first time).  It was one of those little milestones that seemed really important while we were dreaming of what being a parent would be like.  He thought it was great fun to go out in the dark when he should have been in bed and obviously didn't have a clue what we were doing there or why but it was new and therefore exciting. 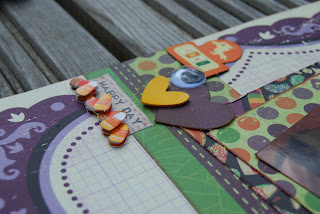 For some reason I was thinking just now about how great that little ghost costume was that he wore that first visit and then realising that he was actually wearing the monster costume in these photos which he wore the year after.  This means that although the layout says "1st Halloween", it is actually not.  Now I have a dilemma which will take a lot of tea and cake to solve. 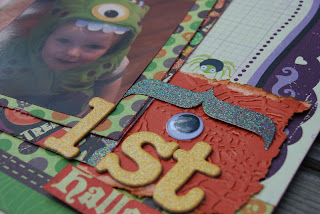 As a slight aside from the costume conundrum, I've just spotted the gorgeous polished wood floor in the photos.  Our old house was a 3 storey Victorian terrace that used to serve as a staff house for the big Union work house at the end of the road.  We loved our little house but it was just too little once we had 2 children.  We miss the village so much and never more so than this week when a chance conversation has led us to believe that Louis's asthma may actually be because of the pollution here, even though it doesn't seem polluted (we are close to the M3, M27 and Southampton Airport).  We now face another conundrum of what to do about this potential new information as nothing is concrete yet.  Of course, I will need a fair bit of tea and cake while we process this.

Switch the kettle on would you?