Story Telling Sunday - The One About The Cow(s)

My precious for this month's Story Telling Sunday is not an object, unless you count the photograph, but a memory.  Sian suggested something with a bit of mystery, so here you are... what's going on here? 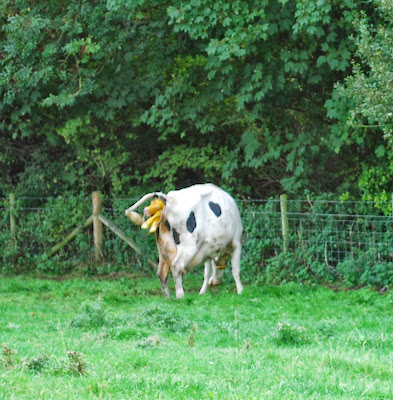 Did you spot the calf making its first appearance there?  I can tell you that the head and hooves were out for about half an hour before the cow finally managed to birth him and we were all a little bit worried that he had got stuck!  Out of the 7 of us watching, 3 of us were mummies and we winced every time she had a strong contraction.  The cow kept sitting down but never sat on the calf at all and ended up actually birthed him to the side of her while laying down.  He didn't move at all for a while and she didn't seem interested but eventually started the licking process and before too long we heard his first little moo!  We kept checking on them both while the light was okay but we didn't seem him up and about until the next morning.  It was wonderful to see him make his way up the hill on his wobbly little legs, looking all white and dark brown like a proper Fresian calf.

Obviously this wasn't in our back garden... We spent a rather lovely weekend at a Featherdown Farm in Dorset called Knaveswell for a stew pot weekend.  It was cheaper than a normal weekend price and included two wonderful stews with local ingredients and I can tell you that they were absolutely delicious.  It was rather strange to be in one of the tents that we know so well now but at a different time of year.  At the beginning of June, the days were so long and light that the children thought it was time to get up at 5.30!  This weekend though, the shorter days and the canopy of trees at Knaveswell meant that it still felt pitch black at 8am and that us adults were in bed, asleep at 9.30pm!  Considering it is October, we were actually quite warm in our beds too which was a relief.  The children always have such a wonderful time on these trips and never want to go home and I hope that when they look back in years to come, they will realise what a fantastic experience they had and what amazing things they saw.