Keeping my head up?

Firstly I just wanted to say thank you so much to everyone who has commented on my blog.  I am in the process of replying to everyone and trying to catch up on other people's posts but I've lost a few days with a horrid head cold.

A simple cold to most people is just that but there are others for whom it signals bigger things.  For me, I know that I am going to get problems with my sinuses and possibly / probably get labyrinthitus too.  This is like a form of vertigo and so for the last few days I've been unable to do much other than lay down or keep as still as possible as moving quickly is a recipe for falling flat on my backside.  However, with the Smalls around, keeping still is pretty near impossible.  The follow on from all this is the dreaded depression.  Yes colds are miserable, but for someone with a low threshold it can tip me over into the blackness that I have to fight so hard to keep away.

I do take a very low dose of  medication for the depression after I hit such a bad low in September, but we are still trying to find something that works without giving me horrid side effects.  The exercise works to some extent but obviously I cant exercise at the moment because of the dizziness - cue downward spiral.  I'm also doing the iTalk programme which is sort of like cognitive behavioural therapy over the phone.  Its a bit odd but the techniques are useful.

My crafting does help too in many ways, more of that tomorrow hopefully, but again scissors and sitting up are not a good combo with the swirly head!  I then start to get frustrated because I want to craft and can't.  Time is limited for everyone and I'm sure many people get frustrated at the lack of time to do their thing, whatever their thing might be, especially when your energy is zapped by bugs and then you have to catch up on other stuff first.

I did get to my crop on Saturday as it was only the beginning of the stuffy head phase and I thought I was on the mend.  I spent the whole day sniffing and sneezing, staring at my supplies without a clue where to start.  My poor nose was so red and sore and  at one point I was working one handed while I kept a tissue to my nose - how delightful!  I checked out early, full of frustration that it HAD to be this weekend that I got ill.  Of course, this weekend is my daughter's 2nd birthday and I have cakes to make and cleaning to do and presents to wrap so no time is a good time really.

I did learn a lot from the crop though and I'm going to post on that tomorrow.  I might also share some links to some delicious looking cupcakes that my friend suggested I make for the weekend's tea party.  It will be good to do some baking again, I simply HAVE to lick the bowl so its no good for my diet but this weekend I have an excuse!  For now, I will leave you with a pic of my crop bag with my wonderful butterfly bag-charm which I made from my fave Dear Lizzy paper. 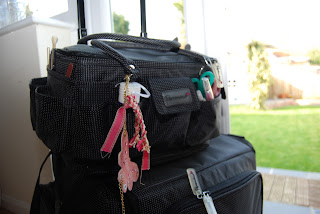