Meaning from the Mundane

This post is brought to you by the letters A.N.N.O.Y.E and D. (and with a prompt from BFS).

I was all set to show a little pic of my Smalls (note the capital letter for my children, not a small letter for my knickers) helping me to cook the dinner and tell you what it means to me etc, I was even getting a little whistful about it.  However, far more important events have overtaken and so, doing the prompts out of order, I have to tell you about my parcel, just because I have to tell SOMEone and get it off my chest.

I'll set the scene.  We have several craft shops within 10 miles of here so we are quite lucky.  However they all stock the same thing so there may as well be only one!  I took the plunge and ordered a ahem.. large package from Two Peas in a Bucket in America.  The P&P is astronomical but when you factor it into the price of each item, it still works out that things are generally cheaper.   I have since discovered an on-line store in this country which pretty much sells similar stuff but not all of the wonderful goodies that I crave.  Anyhoo, I sat back and waited for my parcel in great excitement, especially as other than a couple of kits from Shimelle, I haven't done much on-line craft shopping (I know, what HAVE I been doing?!)  You can track your parcel with 2 Peas so every now and then I would check in and see how it was doing.  Okay, every day.  Alright, every hour, you got me!  I got more excited as the status changed, especially when it finally said it had entered customs in Great Britain.

I started stalking the postman, opening the door as I saw him walk up the drive, scanning the local area on the school run in case I missed him.  Yesterday he knocked at the door because he had a parcel!!  Yay!  Except it was just my printer ink.  Boo.  He looked so sad as my face fell at the sight of the small brown parcel and not an overstuffed pizza box.

Then yesterday afternoon the status changed to "Attempted Delivery".  WHAT???  How had I missed them? I had waiting in, not even going into the back garden in this glorious weather in case he happened to sneak up.  It said the time was 6.37am and we are up at that time so I realised it didn't mean here, it meant the holding depot before delivery, maybe, and that it was definitely on its way.

This morning, I did an impression of Vernon Dursley from Harry Potter, sleeping on the doormat to apprehend the postman.  Nothing.  We rush back from the school run.  Nothing.  And then I get this...

It is a bag containing an item of post which has been damaged or has stuff missing in some way, with an apology from Royal Mail. The blue slip of paper inside was just the label with some information about an international parcel from America. Gasp!  Oh no!  I could read no more.  I was hyperventilating.  My precious Cosmo Cricket papers!  My stroke-able Dear Lizzy ribbon ruffles!

I calmed down and looked at the label more closely.  It was actually the customs bill for my package which was sitting in a depot a few stops down the motorway.  Phew!  I waited till B woke up and we put our sunglasses on and whipped down there.  Then we got lost.  Was I ever going to get my package?  I had to call Management to find the way in as I could see the building but I just couldn't get to it.  Eventually I got my hands on my box, I was so desperate to open it but I had to wait just a little bit longer - darn the school run.  We made it home in time for me to have a quick look before dashing back out to get L but its not the same when you are in a rush and have a little helper with you! 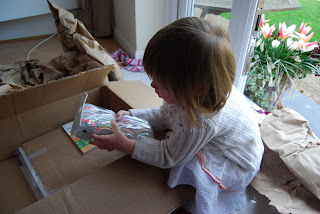 My favourite bits are the Cosmo Cricket Salt Air collection which I got with a view to doing holiday stuff (more on that another time as I need some advice!)  However the colours are just so bright and yummy that I want to use it for a layout about B and her painting which I had already sorted ready for tomorrow.  I've packed all my stuff for the crop (10am till 10pm!  Management has the children to himself all day!) but I may just need to add a few more bits from this parcel...  It was such a long time coming (it felt like it but was only 17 days!) but it was worth it. :-)

So I have a question for you fellow scrappers - how do you pack for a crop?  I'll let you know about my packing shenanigans in another post but for now I need to go and stroke some ribbon ;-)