Remember that bossy red haired girl with freckles from Charlie Brown?  I used to look like her!  My hair isn't so red any more but the freckles are still there though.  I kept thinking of her when I was making my soaps and scrubs for teacher's presents because I used peppermint oil!

I really enjoyed making these soaps and learned so much too.  I can see this being quite addictive! There are a couple of ways that you can make soap - one is quite technical and involves double boilers and thermometers and such like.  I went for the much easier melt and pour method.  You buy chunks of plain soap (I got mine from various places on E-Bay depending on quantity and price) and then shape, colour and scent it to your own design.  You can get various types of soap base and initially I went for glycerine for the red layer because it takes the colour well and an opaque base for the white layer.

Basically you melt a few chunks in the microwave and then stir and stir until it has all dissolved.  I used enough chunks for one layer which was a total estimate but as long as you keep the quantities the same each time then the layers will be the same thickness.  You need to keep stirring frequently to stop a skin forming because it does cool quickly and then I added a few drops of scented oil.  I used peppermint to keep to the theme of candy canes and to match the invigorating scrubs.  I also coloured at this stage too - one tiny drop of red soap colour (also from E-Bay) for the pink layers.  I used a silicon loaf mould and didn't line it or grease it or anything and it just popped out - easy peasy. 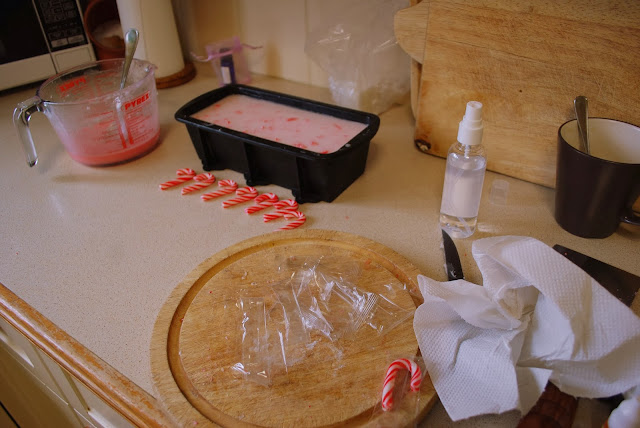 You need to work on one layer at a time so melt, add colour and scent and then pour into the mould.  Then spray with rubbing alcohol to disperse the bubbles.  About half an hour later you can do the next layer but before you pour the alternative coloured mix in, spray the hard layer with the alcohol again.  This makes the separate layers stick together and form one solid large soap.  If you don't want to use rubbing alcohol then you will need to pour the subsequent layers on before the previous one hardens but then they layers will merge together a bit more.

For the top layer of my first batch, I crushed up a few candy canes like I had seen in the original pin that I got the inspiration from.  Then I put on another layer and placed a mini candy cane at intervals so I could slice it with a candy cane in each portion.  These teeny candy canes are very minty (huzzah!) and are from the pound shop and are just perfect for embellishing gifts. 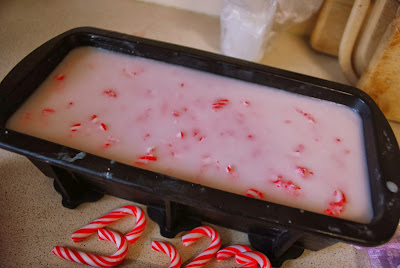 You can see the two batches I made here - the bright red and white striped one with the candy canes on top is the first batch.  The pale pink and white version is the second batch where I used all opaque base instead of the glycerin layer for the red.  On the chopping board you can also see the disaster that occurred as part of the learning experience.  On the second batch I left out the candy cane on the top because I needed to slice them more thinly and I didn't like the way they went a bit soggy.  I should have taken the hint from that. The exposed bits of crushed candy cane on the top went very soggy and literally melted off of the top when I laid the slices down.  They do just rinse off and all is well but it makes for a bit of a sticky gift really.  Also I must have neglected to spray one of the layers with enough alcohol because the top two layers have come loose.  Hey ho.  We will have festive soap in our bathroom for a while yet... 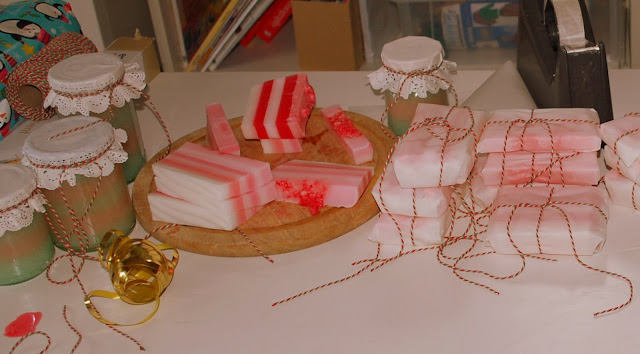 The jars of scrub there have turned out quite well too.  Just a mix of olive oil, caster sugar and peppermint oil.  You just mix the things together until they are the right consistency.  Enough oil so that the sugar doesn't fall off your skin but not too much that it runs off.  Once I had this part sorted I separated it into 2 bowls and coloured one with a spot of greeny blue and the other with a spot of red.  Then I used a teaspoon to plop it into the recycled jars and press it down a bit before adding another layer.  Great for tired and dry feet, and painty or muddy hands or any other place that needs a bit of a buff. 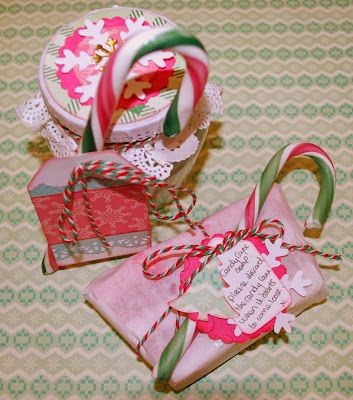 I needed to cover the lids of the jars so I used mini doilies, bakers twine and some of the lovely Bundled Up papers.  I finished off with a snowflake punch and a snowflake brad.  I really hope people like them and don't mind the initial sticky bit too much.  Hopefully they won't mind it being another bottle of wine or box of chocolate.