I have a big smile!

Last week I shared this layout with you.  And I am over the moon to see it featured on Shimelle's blog this week :-)  She chooses about 12 (ish) layouts each week from the sketch from the week before so its not some great achievement like being published in a magazine or even on her workbooks for her repeat classes, but it's a big thing for me.

Especially when I still sometimes often make layouts I don't like much, like this one.  I really liked the idea I had in my head but it just didn't come out right.  I had to carry out a partial scrapectomy (I pinched that word) as the arrow patterned paper was too far down but it's still not the striking design I had in my mind.  I like all the texture and grunginess, which is what I was after to complement the photos of L larking about on the beach.  Obviously I have managed to scratch the face on one of the photos so I need to do a reprint. 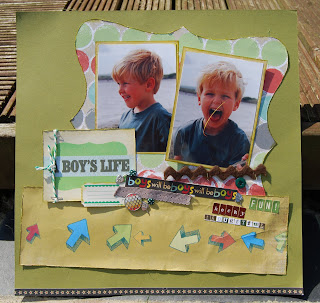 And then there is this one, which I am a bit unsure of.  I like it but I really don't love it.  The photo is L when he was about 4-5 months old.  We were down at the beach and he was grumpy as a grumpy thing and wouldn't sleep and didn't even like the swing which he normally loved.  I remember the day very well although I remember very little about him at all at this time. Scrapping photos from around this time is really important to me as it helps me remember that it wasn't all floods of tears and misery on my part, and not normally on his either as he was normally such a happy baby! 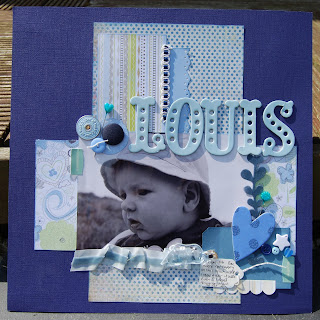 And lastly I thought I would leave you with some creativity from my daughter, aged 2.  Apparently she had been watching me rather too closely and I very very stupidly left my guillotine out so had a little go. 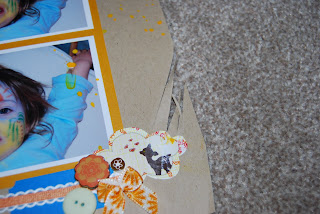 Thankfully this particular guillotine is a small one so she couldn't get a whole layout in, just the corner.  How she managed to do this damage (and cut up a water statement into a neat pile of scraps...) without losing a finger I will never know but I am very grateful for that.  I was torn between anger and huge guilt for leaving it out.  It normally lives in my scrap room where they don't go but I was trying to do something in front of the TV and I forgot to put it away.  Lesson firmly learn't there I think!

Have a great weekend all, bye for now.